The hunting trip of a lifetime...

... at least I hope we don't ever get skunked like that again, in our lifetime.

I feel like I'm pretty decent at hunting. I have tagged  5 doe, 1 buck, been bird hunting, and got squirrels galore. However, the last time I shot a deer I was 17. That was 10 years ago! Also my dad or my brothers did everything for me. They got my tags, took me where the deer were, and handed me a gun. (I did gut my own deer though! That's impressive right?) One year, I was getting ready for Church and my brother told me he saw a deer in the field next to our house. I shot it then went to Church. That's the kind of hunting I like! I'm more about the kill than the chase, I guess.

Jesse had a few days off at the end of October so I went to Cabella's and purchased each of us a "regular deer" tag. I started planning an amazing hunting trip where I thought we were almost guaranteed to bag us some deer (said with a hick twang). I researched where the best hunting was and Grangeville was supposed to be "high density". We planed to leave on a Thursday afternoon and come back probably Sunday, if we didn't shoot anything before then. We were going to sleep in the truck and be where we needed to be when it got light outside. Humm.... sounds comfortable.

My parents were going to watch JD and Elliott. I had a bunch of milk stored for Elliott so I was not worried about her having enough milk. The only thing I was worried about was loosing my milk while I was away from her. I have a pretty good pump so I was just going to pump a lot. Hum.... sounds fun.

We left on a Thursday and after dropping the kids off at Papa and Nana's house, Jesse and I headed out. We didn't get to Grangeville until after dark, so it was hard to find a place to park the truck and sleep. When we got there I pumped, which takes about 30-40 minutes or longer, after clean up and everything. So it took a little while to get settled in and sleeping. The front seat of the pickup was not too uncomfortable, and I didn't get too cold. Jesse said his seat was not that bad either. Not our bed at home, but it worked.

We woke up Friday morning, a little before day light, and I pumped again. We hoped weren't too far away from where we wanted to be. We drove a little bit more and finally found a spot we wanted to hunt. We got our backpacks ready and started walking around in the forest. 2-3 hours later we had not seen a thing so we headed back. I pumped. We drove some more and found another spot we wanted to walk. We walked another couple hours and only saw some cattle. So we headed back. I pumped. It was mid day now so we had some hamburgers and took a nap in our "comfy" bench seat beds. I pumped. We drove around some more, following our map of where the deer was supposed to be high density. We found another hunter dude and when asked if he saw anything he replied, "half a dozen here, half a dozen there". We think he may have been talking about deer. I pumped. We drove around some back roads hoping to find a clearing area to walk. We parked the truck again and walked some more. We saw nothing so again, back to the truck we go. I was sick of pumping and Jesse was sick of stopping so I could pump. I pumped. It was dusk outside and we decided we did not want 2 more days of this. So we went home. On the way home, at dusk, we saw a whole bunch of deer... On private property, not in the right zone, not the right gender...


We waited until Saturday night to tell anyone we had gone home. Jesse and I went to 3 movies and had a date that lasted all day! I did have to pump at home but, clean up was much easier and it took less time! My folks kept the kiddos until Sunday. It was a much needed time alone for Jesse and I. It just would have been nice to have deer meat to bring home. Oh well... Here's to our pig hunt planned in April! 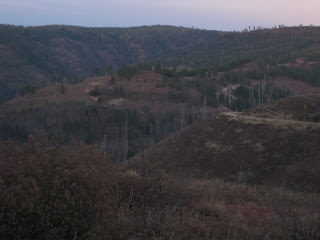 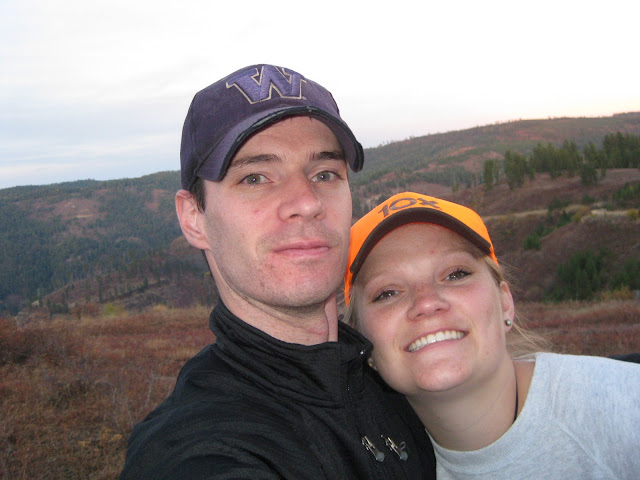 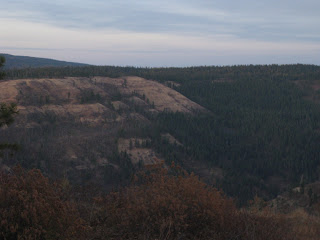 Posted by Memórias of the Davolt Family at 9:44 PM